While I'm still getting comments on my post about How to Leave Facebook, around the web many more instances of discontent with Facebook's policies are rearing their heads.

First, it was comforting to know that I was not alone in the not-so-pleasurable experience of manually deleting all my Facebook content piecemeal. Kate Raynes-Goldie writes:

It took me just under four hours, sitting there clicking delete delete delete. It also didn't help that their software seems to get a bit screwy when you delete a lot of stuff fast. At one point I had left a bunch of groups, but it still had me listed as a member, but wouldn't let me leave again because I wasn't a member. Once you've had your hours of fun, you have to email Facebook again and ask them nicely to delete your account. I thought all of this was an insane requirement, so I emailed our friend Facebook Peter. The reply:

Most of my notes and photos from the World Science Forum are up on the World Academy of Young Scientists website, so if you're looking for those you can find them all on the WAYS site.

I already wrote about my initial second impressions of the World Science Forum, and not much has changed about that, though I did finally meet Hugues Lantuit, President of the Permafrost Young Researchers Network, in person, and we hung out for lots of the conference. Like most of the people at WAYS, he's a total overachiever with a sharp wit and a wicked sense of humor. He also curses like a sailor, as I would soon find out. During the conference, I didn't have time to show the visitors much of the city, but the WSF receptions on Thursday and Friday were pretty great.

Thursday morning, during the incredible breakfast at the hotel – the Hungarians know how to fry a sausage, let me tell you – I met up with Hugues and we walked up Vaci Utca (a beautiful, beautiful pedestrian walking street along the Danube lined with trendy shops) to the Hungarian Academy of Science, just before the Parliament. Security was rather tight with the presidents of four countries there, but we got in without incident, checked our coats, and met up with some other WAYS members in the main hall. With the 'Heads of State' sessions starting, Daniel Mietchen (Max Planck Institute for Human Cognitive and Brain Sciences), his girlfriend Ji Hyun, Mande Holford, Michael Fischer (founder of the World Lecture Project, and of course Gaell Mainguy, President of WAYS, joined us. The heads of state panel was, well, everything I had hoped for, and let's leave it at that. The president of the Hellenic Republic, though, gave a passionate and relevant speech about serious need for change in our attitudes on the environment.

Read more about Back From The East

Are plane seats getting smaller and smaller, or am I get bigger? I mean, I'm not a big person, but the width of my shoulders spills out past both edges of my seat. Sitting on a Delta Airlines flight from Montreal to New York - the first half of a trip to Budapest for the World Science Forum, thanks to of UNESCO and the World Academy of Young Scientists - I'm in a aisle seat (utterly necessary, as I get up as often as prescribed by my claustrophobia and small bladder), near the middle of the plane. Oddly, I'm in a very good mood, though I'm uncertain as to why exactly. I found a great power suit foraging through my Dad's old closet that turned out to be a perfect fit, the weather was beautiful, I'm looking rather dapper if I don't say so myself, and the very cute, latin-looking flight attendant keeps smiling at me. Preparing for takeoff, she approaches the people sitting a couple rows in front of me...

Read more about Welcome to Budapest

I'm feeling it's not much of a step up from what they had before.

First of all, no one uses "text size selectors" anymore.

Second of all, if you're going to use one anyways, the least you could do is make sure sure that it doesn't completely break your design when a user selects a larger font:

I (heart) my camera.

Now that Guitar Hero III is out - and my friend got it even before it was officially released, somehow - we've been playing that (and the obligatory Halo 3). 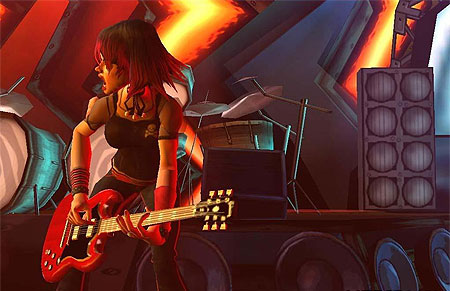 Guitar Hero II was the first one that I played and bought. For those who don't know it, it's a musical rhythm game that has you "playing" a toy guitar to match the music / frets going by on the screen. It's an awesome party game, and the soundtrack and art are great.

It also introduced me to / reminded me of some bands and genres that I hadn't listened to in a while. Classic American and British Rock and Metal are up there as some of my favorite kinds of music to listen to these days. In this mixtape, you'll find:

Microsoft Corp. found a friend in Facebook on Wednesday, paying $240 million for a small slice of the rapidly growing social networking Web site.

The deal, for which Microsoft reportedly beat archrival Google, expands the Redmond company's advertising relationship with Facebook and gives it an ownership stake in one of the hottest online properties.

But the companies were immediately questioned about the $15 billion value that the deal places on Facebook, which puts Microsoft's ownership interest at 1.6 percent. Earlier reports of that figure raised concerns about possible overvaluation of Facebook and other "Web 2.0" sites.

"Obviously, $15 billion is a pretty big number for Facebook," said analyst Brad Reback of CIBC World Markets, in the first question of a conference call in which the companies discussed the agreement. He noted that Microsoft Chief Executive Steve Ballmer was recently quoted commenting on the "faddish nature" of social networking Web sites.

"You can sit back and watch how this partnership is going to develop," the Microsoft executive said during the conference call. "There's a lot more we're going to be doing together."

Emphasis mine. Not incredibly newsworthy, but an interesting move and play out (Microsoft beating out Google). The idea that there will be further cooperation between the Redmond giant and Facebook is intriguing as well.