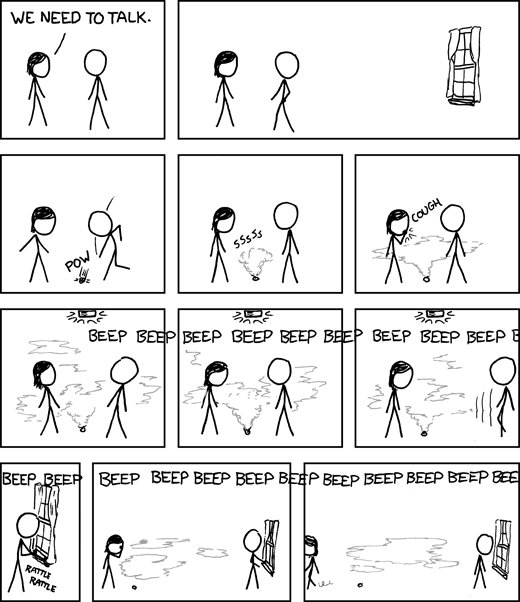 Just what we need - more bad news about the economy. Montreal depends on these events and festivals to generate huge windfalls. Losses like these pile up. If our NeoCon, right-wing government continues with their Draconian cuts to arts and culture, you can bet that Montreal - one of the most culturally vibrant cities in the world - will feel the hardest crunch in Canada.

Atwood said she went to hear the Bloc Québécois leader speak at a Bay Street business luncheon Friday because of his strong endorsement for the arts.

"I'm here because Mr. Duceppe understands the contribution that culture makes to our economy," she told CBC News at Toronto's Economic Club.

Asked whether she would vote for the Bloc if she lived in Quebec, Atwood gave a resounding: "Yes, absolutely. What is the alternative?"

Dr. David Levy musing about whether scientists should have a say in how their research gets used and the imminent robot takeover:

Read more about Technology out of control

This evening at 16:30, I'll be at the Canadian Centre for Architecture (map) as a panelist for a session along with Evan Prodromou, Véronique Boisjoly, Michel Hellman, and Christine Préfontaine.

The session, which will focus on use of online media as a means of expression and activism, will be animated by Mouna Andraos and Fady Atallah.

The event is being held to mark 'the opening of the Shaughnessy House's hang out area at the CCA'.

Starting September 2008, access to the social networking service Facebook will be available only on Concordia’s wireless network.

The service will no longer be accessible from desktop computers with only a wired connection to the Concordia University network.

Concordia’s network administrators are not trying to block access to Facebook, but to manage the manner in which the Concordia community accesses the service.

The university has decided to implement the restriction because of concerns that the continuing reliability of the Concordia wired network could be compromised because of spam, viruses and leaks of confidential information related to use of the social networking site.

I'll admit that the given reasons behind the restrictions are obviously bullshit / filler text (spam and viruses aren't any more likely to come from Facebook than from other web service that users are allowed to access). The real reasons behind this change are somewhat more political and pragmatic: control the amount of time that students, staff and faculty spend wasting their working hours on Facebook. If they've made this change there probably was already a problem with users using Facebook in excessive or inappropriate ways (which, of course, Facebook is designed to encourage).

Indeed, pretty much everyone I know who uses Facebook in any useful way has become less productive than they were before joining Facebook. Either way, Concordia is to be commended for stepping in and making what may well be a very unpopular decision for reasons that those without all the facts may not fully understand yet - this is, in essence, one of the principle roles of any government.

I try to steer clear of statements like "the ends justify the means", but I think it might very well apply here.

Years ago, when I made the permanent switch from Apple OS X to Ubuntu Linux, the most difficult part was living without two of the tools (non-Apple ones) that made using a Mac so much more tolerable: Quicksilver and Growl. Now that their equivalents on Linux have reached a point of relative maturity that makes that easier to bear, I realize that there are many, many, many more tools on Linux that I just couldn't live without, if I ever had to switch back (at gunpoint).

The most pervasive of these in my everyday workflow is Compiz-Fusion, which is not only the sexiest eye-candy available on any OS, but has single-handedly changed the way I manage the workflow on my computer. The new cylinder-desktop plugin only pushes the boundaries further.